When Takata brought Reiki to Japan in the mid-late 1930s, she told many stories about the beginnings of Reiki as we know it. Over the years, others have visited Japan & brought forward more information.

Our modern practice of Reiki has been handed down from Mikeo Usui, who was born Aug 15, 1865, into a Samurai family in Teniai (now called Miyama cho) in the Gifu Prefecture in Japan. Little is known of his early life, but as a child of the privileged class, he likely began his studies with the Chinese & Japanese classics, learned martial arts, music, read & wrote poetry.

Born into a Buddhist family, Mikeo Usui became a lay Tendai priest, who married (Saduko Suzuki) and had two children. It seems he introduced his teachings, Usui do, as a means toward enlightenment, with the healing that took place for students 'a wonderful side effect.' His inclusion of attunement or reiju, which facilitated spiritual alignment. 'It seems that all students of Mikao Usui recieverd reiju & the five precepts. ... There does not seem to be a disinction between clients & students' (Reiki Sourcebook, p 58/59) He also gave students mantras and meditations. Usui began teaching in about 1915, his wife's cousin Suzuki san was one of the early students.

'Now and again, it is necessary to seclude yourself among deep mountains and hidden valleys to restore your link to the source of life. Breathe in and let yourself soar to the ends of the universe; breathe out and bring the cosmos back inside. Next, breathe up all the fecundity and vibrancy of the earth. Finally, blend the breath of heaven and the breath of earth with that of your own, becoming the Breath of Life itself.' (Morihei Ueshiba, 'the Art of Peace' by John Stevens) 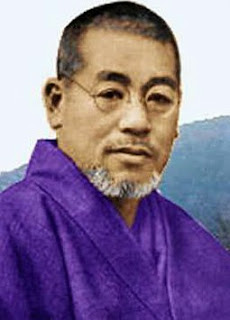 In 1922, according to the Memorial stone errected in 1927, Usui 'Climbed kurama yama (12 kilometers N of the Koyoto Imperial Palace) and after 21 days of severe discipline without eating, he suddenly felt One Great Reiki over his head and attained enlightenment and he obtained Reiki Ryoho.'  The Usui Reiki Ryoho Gakkai society was set up one month after his experience on kurama yama.

The teachings became more formalized, symbols (Yantras) were added to the mantras, & hand positions taught to students who found it harder to work intuitively.

The next year, Sept 1, 1923, the Kanto earthquake, measuring 8.3, occured near Tokyo & Yokohama. Many who survived were involved in relief work, including Usui and his students, who 'offered Reiki to thousands of students.' In response to this need, in 1924, Usui moved his home & dojo to Nakano ku, outside Tokyo. This may have inspired Takata's parable about Usui's work among the 'beggers.'
'He was often invited to travel throughout Japan treating people & teaching students. Mikao Usui had over 2000 students in total, about 60-70 okuden (2nd Degree) students & 21 teacher students who reached shinpiden. (information from the memorial stone & from Hyakuten Inamoto of the Reiki society - p 64 in Reiki Sourcebook) Reiki Council UK offers an account of the history, with teacher student/Master lists for Usui, Hayashi & Takata.
Many of the students who studied with Usui were nuns & monks, and in 2005, 12 were still alive (some over 100 years old) The Reiki Sourcebook includes a lineage chart, with 13 of the senior students. In the year before his death, several Naval officers also studied with Usui.

In Japan at the turn of the century, hands-on healing was very popular, & other teachers also came forward at that time. Martial arts, honor, spiritual practices were often linked. Usui is said to have exchanged information with the founder of Akido, Morihei Ueshiba and Onisaburo Deguchi, founder of the Omoto religion. (Source Book & Reiki Council)

Usui died of a stroke on March 9, 1926 in Fukuyama, & the memorial stone was erected the following year, at the Pure Land Buddhist Saihoji Temple in Tokyo.

"These are truly great teachings for the cultivation and discipline that agree with those great teachings of the ancient sages & the wise. Sensei named these teachings 'Secret Method to Invite Happiness and miraculous Medicine to Cure All Diseases." (memorial stone)