While writing about Reiki yesterday, I looked on u-tube to see if there was anything with our beloved USA Lineage keeper, Phyllis Furomoto, who is Takata's granddaughter. I've had the honor/blessing of meeting Phyllis during Reiki Gatherings at Breitenbush, & played the harp for a meditation she led.

I found a delightful interview done in 1912, with another Reiki Master of Japanese descent, Barbara Matsuura. As I listened to the 6 segments (1 hour total) I found that though she has travelled more than I, there are many places Matsuura's & my paths overlap!
She studied ballet, & then learned Tai Chi & Qigong. I began with ballet in 1978, & studied Tai Chi concurrent with my massage training, beginning in 1983. I began teaching both Reiki and Tai Chi in  the early 90s, & have been working more deeply with Qigong the last decade. 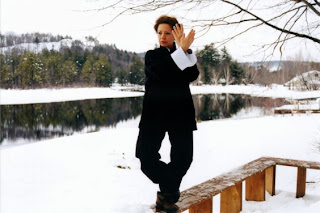 Matsuura travelled with her husband, in Japan, she learned Kabuki dance, & later in Germany flower arranging & Japanese classical dance. Following surgery on her thumb after a bicycle accident, she didn't regain full movement. Seeking other treatment, she was introduced to Reiki, & decided to learn.
Her classes were held 'once a week, for a month, three hours each class.' She enjoyed the support of the teacher as she & other students integrated the Reiki energy over the month.
Barbara has dedicated her life to healing, & continues to offer sessions, with offices in Japan, Sedona AZ & California.  In the interview, Phyllis & Barbara affirm that 'Every student has within them their own truth,' and each of us can learn from others.

Matsuura traveled to Usui's Mountain Kuramayama, & wondered why Reiki was found there ... she found the temple dedicated to three powers of Sonten Buddhism, Light of the sun, love of the moon, & power of the earth:

Oh Sonten
Beautiful as the Moon,
Warm as the Sun,
Powerful as the Earth.

Barbara Matsuura is a beautiful example of living Reiki & Qigong, & reminds us 'Just sit & Be. Be the Reiki - don't try, just Be it!'

(photo of Barbara Matsuura from her website)
Posted by Nadya at 4:12 PM