A couple of weeks after meeting our Reiki Master, another student & I arrived at her home for our First Degree Reiki class. One of Analyse's Mastery students joined us as well, to participate & observe.
We alternated between teachings, sharing stories & experiences, initiations & learning to give (& receive) treatments.

Analyse described the initiations as 'clearing the pipes' for the energy to flow through us, unimpeded. 'Think of the water pipes in two houses, a 'city house' & a summer home. If you turn on the faucet at home, the water runs clearly, while those in a place that's rarely used my sputter a bit, & run a bit cloudy. BOTH pipes have corrosion, but you don't observe that as much in the pipes that are used regularly.
'It's the same with people - some people naturally allow energy to flow, others don't; but both have 'blocks' that restrict the flow. The initation 'clears the pipes' in BOTH, allowing the energy to flow unimpeded!' 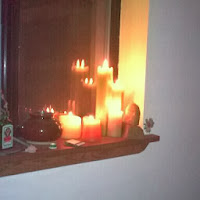 I had certainly experienced that - sometimes I 'felt' more in my hands than others, and I had sensed that there was 'more' I could do, if only I knew WHAT it was! With the initiations, & the ensuing time for practice, I felt the energy more consistently!

She also used the analogy of light - & told the story of Usui carrying a torch through the city in the daytime. When questioned about 'why?' he would say 'I see plenty of darkness ... do you see darkness, too? Then come to my talk this afternoon ...

Analyse gave us suggestions on using Reiki, including self-Reiki treatments. She warned us that we might experience a 'healing crisis,' after the initiation: physical aches, emotions might flow, etc & to observe them, rather than get caught up in them!

I found myself crying several times over the next few days - as I read a book I'd picked up on the way home which triggered a comment a HS teacher made! I remember realizing that I wasn't really sad, rather it was the release my teacher suggested might occur.

And while I did self-Reiki, & utilized the energy in my massage sessions, I didn't know ANYONE in my circle who also practiced Reiki .....