What a wonderful time we had in class!

There were six students, & five who came to 'Refresh' with Reiki; it was a wonderful experience! As we began, I asked each student to introduce themselves, speak a little to what brought them to the class, & share a concern or 'Worry.'

Those Refreshing or 'Auditing' the class generally had felt a pull to reconnect with the Reiki energy, or felt a special need for it at this time of their lives. They all were delighted to have the opportunity both for themselves, & to encourage those just beginning. 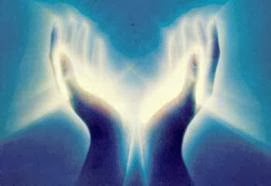 The new students were eager to learn, AND several expressed a concern that THEY couldn't learn it! One mentioned SEVERAL family members 'do' Reiki, but she tends to be more Left Brain/analytical. She wanted to learn, but just didn't know if she'd feel anything. That was a common concern "Everyone else is going to feel it, but I'm not." Another, an electrician, commented that when people talk about feeling energy, he thinks of 'energy,' he expects to feel something dramatic, rather than something subtle. A third expressed concern prior to the class that she's more introverted, she watched the treatment exchanges. I released my own desire to facilitate the perfect experience for everyone!

I talked story, passed out the Flower Essence Bouquet bottles, and we looked at some of the Reiki books. We talked about uses, including Reiki for food & drink, & doing lots of self Reiki over the first month. As we moved into the initiations & onto the tables for exchanging Reiki, there was soft conversation, and lots of smiles.

When we regrouped, everyone was pleased to report they DID feel something, both when giving and receiving. Descriptions of what was felt varied - sometimes a tingle, other times, like a soft breeze was blowing over the recipient's body, areas of concern were identified, & often confirmed by the recipient ... by the end of the day, everyone was eager to go home & practice, and ready to learn more.

Several times I shared my belief that the Reiki energy will teach each person more than any class, book or teacher ever will! The initiations open participants to the energy, the teachings give suggestions for use ... ultimately, it's up to the person who becomes a Reiki conduit to pay attention, & learn from the energy!

The Time Angels really helped out, & we were finished by 4:30, rather than 5! In two weeks, we'll meet again for part two of the class. A couple of students who were ill will be joining us, and perhaps others wishing to refresh their Reiki connection.

Just for today, I am grateful for Reiki, and for being part of the ever expanding circle of Reiki practitioners!