Ask a cat if they would like some Reiki, and they'll likely tell you they invented it!!

When i embarked on my Reiki journey, it seemed by 'happenstance! During her talk on the asteroid Chiron, the 'wounded healer, Analyse mentioned Chiron oversees healing initiations, & invited those interested to register for a Reiki class in a few weeks.

I was intrigued, & signed up for the class on the spot. I'd long realized there was 'more we could do' with our hands, without personal effort; but hadn't been sure how to tap it consistently.
One other student and one of Analyse's new Masters and I arrived for the class. After the introduction, we moved to the massage tables for our first sessions, and the resident kitty was at the door, wanting in! It joined Analyse for sessions, then would go out during the Reiki lessons! 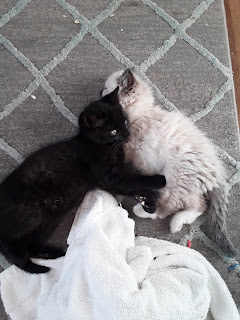 In the years since that first class in 1989, I've done Reiki on animals, or they've joined in classes several times.
Coal and Ash (grandkitties) 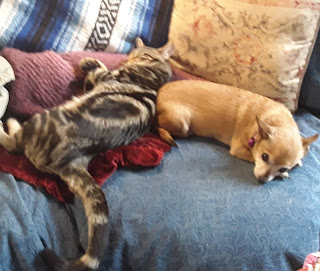 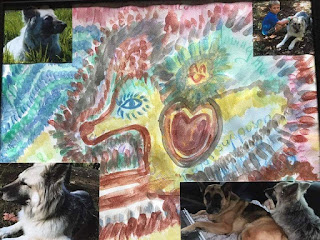 A friends Intentional Creativity® Tribute
There are, of course, many more stories - and Mrs Takata shared some of her own. Living among farmers in Hawaii, she instructed them to hold eggs and beam Reiki before putting them in the incubator, and to use their "Reiki hands" on injured animals. If the injury is acute (like Jade's hip) off the body etheric is generally more comfortable than direct Reiki.
Several Reiki Masters have written about their experiences with animals, and this Psychology Today article highlights one practioner, Kathleen Prasad's work with Reiki and animals.
When I'm asked if one needs to "believe in" Reiki for it to "work," I often tell an animal healing story - the animals know it feels good/ is calming and helpful, without needing statistics, or to be convinced! And like Kathleen, I've found that animals will lead, and let us know what they want!
Posted by Nadya at 5:57 PM